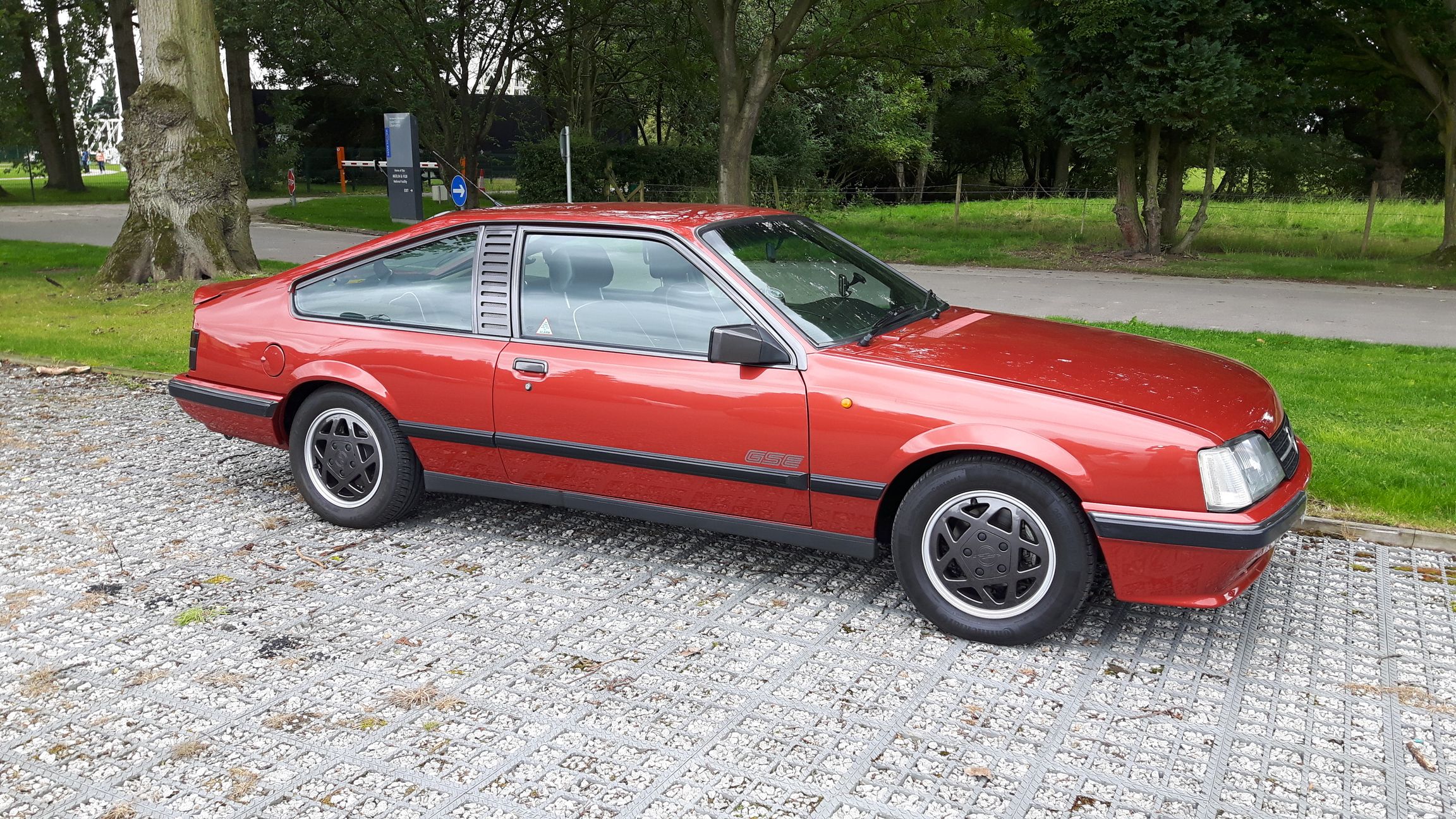 The Opel Monza often seems to get compared to the Ford Capri but the Monza was a far superior beast to the ‘Dagenham Dustbin’ in my opinion with better looks, handling and in most cases performance. The ‘Crapi’ 2.8i was marginally quicker but it still had that same old antiquated horse-and-cart rear suspension out of the Ark.

When I first saw a Monza and its Vauxhall cousin the Royale Coupé it was love at first sight and I knew I had to have one. I owned a Series II 3.0E for a couple of years in the mid-Eighties but then children came along and I had to bow to the inevitable and swap it for something a bit more practical with more than two doors. However the car I always wanted was the Monza GSE with that cool digital dash. That desire never went away and after years of pondering and looking I finally acquired one (above) in October 2013.

In their day these cars were pretty quick but nowadays your average yobbo in a hot hatch will leave a Monza standing. However size – or speed in this case – isn’t everything of course. I don’t really know why I like these cars so much but those are human emotions for you I suppose. I love the fastback styling and the understated spoiler on the back – so much more classy than that brash Essex Boy ‘whale tail’ on the Sierra XR4i. But I guess that above all else the car evokes memories of a significant period in my life. With its digital LCD instruments the Monza GSE “truly was a child of the Eighties” as one of the Autobahnstormers club members once said to me, and who knows – one day it might yet become a true classic.

Unfortunately Monzas were quite well known as being rust buckets and my car was no exception, being badly afflicted with the tin worm after thirty years. These cars never were very common on British roads but now they are rarer than hens’ teeth as most of them have simply fallen to bits (at this point the Capri enthusiasts can with some justification get their own back here by labelling the Monza as a ‘Rüsselsheim Rotter’). A mate of mine once described my car as a “good ten-footer”, i.e. it looked good from ten feet away (or three metres to my European friends). However once you got close up you could see that things weren’t quite so fine and dandy. I knew all of this when I bought the car of course; the previous owner made no secret of the fact that it needed restoring. But faced with the problem of owning a car basically containing more holes than a lump of Swiss cheese, what to do?

After a fair bit of investigation and asking around I decided to give the job of restoring the car to JEB Commercial & Car Ltd. in Cannock in the West Midlands on a do-it-in-your-spare-time basis. Paul and Andy at JEB are both Monza enthusiasts who know the cars very well and Cannock is relatively easy to get to from where I live, so it seemed like a logical choice. The car was delivered to JEB at the end of June 2015, regaining her MOT in March 2020 and she is now back in circulation trundling around the country lanes of North Essex – when the weather is dry of course!

My car is completely standard in that it is a five-speed manual and doesn’t have any of the optional extra toys like an electric sunroof, ABS or air conditioning. However being a manual it’s a bit more fun to drive than the more common automatic version. Below is a summary of the restoration process over the years:

Work has finally started on the old girl after a bit of a delay. Paul my restorer has been inundated with a batch of horse-boxes to refurbish of all things – I do hope he doesn’t get the two projects confused!

The car is in a bit of a bad way and it was a close call as to whether it was worth restoring at all apparently, but fortunately Paul and his colleague Andy decided that the answer was yes. I aim to go up and check up on her in another six months to see how she’s getting on.

It’s also becoming clear that some previous ‘restoration’ work done on the car before I bought it has in places been a bit of a bodge. There are parts of the inner wings where new metal had just been welded straight over the top of corroded areas, with the result that Paul is having to hack all of the bodged stuff out first in order to get at the rust.

Some progress on the front of the car, mainly on the notoriously corrosion-prone suspension turrets. I want to keep that bracing strut on the suspension as I think it looks pretty cool!

Meanwhile the offside front inner wing has been repaired with a new hand-fabricated inner-wing brace as the GM originals are virtually unobtainable, and all rusty sections replaced with new metal:

The repair work on the front of the car is largely completed. The nearside wing now has its new inner-wing brace as well. There’s some filling still to be done and the primer to go on but we’re nearly there:

Now to the rear of the car, and more horrors lurking under the covers – literally. It appears that the chump who carried out some previous ‘repair’ work to the rear valance just left the rusty metal in place, welded some new stuff over the top and then plastered over the whole lot with a load of fibreglass and filler!

Paul has cut out the rusty bottom sections of the rear wings and wheel arches and welded in new hand-fabricated sections of galvanised sheet steel:

Paul says that this is the worst Monza he’s ever worked on rust-wise. I did notice that he’s got a few more grey hairs this time round compared to six months ago …

The bodywork at the rear of the car is now completed. I managed to get a new section of rear valance from the Autobahnstormers and Paul has now welded this in to replace the fibreglass bodge that we saw last September:

Now the underside of the rear, looking up towards the fuel filler inlet. Lots of anti-stonechip underseal stuff to protect everything:

Next job is to attend to the floorpan inside the car, as there are some fairly meaty holes there that wouldn’t look out of place in the Flintstones. Once that’s done we could be near to completion of the bodywork repairs. Then it will be the paint job, followed by putting everything back together and rectifying the various mechanical issues such as corroded fuel and brake lines etc. etc..

More rot discovered unfortunately, this time with the rear suspension semi-trailing arms. For some reason the offside was in a far worse state than the nearside:

The brake disc backing plate had rotted through so much that there was nothing for the handbrake shoe retaining pins to grip on to. And yes you do see that correctly – somebody has welded a large half-inch-drive socket to the top of the arm to act as a spring seat!

With a great deal of effort and I suspect a lot of swearing (always helps in my experience) Paul and Andy have managed to get the hubs to bits, replace the knackered offside wheel bearing and repair the semi-trailing arms. New spring seats have been fabricated and welded on to the arms. Finally everything has been coated with more of that grey anti-stonechip underseal stuff (Gravitex I think) to hopefully keep out the tin worm in future:

I managed to source a new offside disc backing plate from GM6 Spares in Cornwall, but the nearside one is not nearly so bad. It’s perforated in places but is repairable.

Still to do is to finish off the front of the car (i.e. putting the wings back on), the replacement of fuel and brake lines and the refurb of the brake callipers. And not forgetting the paint job of course. But so long as no other horrors are discovered I think we could be looking at next Spring for completion of the car.

Not a big change from last time but a first taste of what the car will eventually look like when she gets her new paint all over. Under the bonnet now looks absolutely gorgeous!

It’s hard to believe the transformation of that nearside suspension turret compared to a couple of years ago:

Underneath, both front wings have got plenty of anti-stonechip on them so that hopefully the car won’t be rusting again for a very long time:

With her wheels back on at last the Monza is finally starting to look like a real car again. All bodywork repairs have now been completed bar a couple of rust patches around the windscreen, and the car is being prepped for her repaint:

Meanwhile, under the front wings there is a lovely top coat of Waxoyl:

Next task for me is to get the brake callipers refurbished, preferably with stainless steel pistons as Monza callipers are quite prone to sticking. This has proved to be a bit of a mission to organise but I’m hoping that Past Parts in Bury St. Edmunds will come up trumps this time.

The refurbished callipers have come back from Past Parts:

What a difference; they look almost like new. They’ve been zinc-electroplated and new pistons and seals etc. have been fitted. Unfortunately I wasn’t able to get stainless steel pistons made within a realistic time frame, but hopefully with regular brake fluid changes these chrome-plated ones will be OK. I’ve got the old pistons so I can always revisit this in the future if necessary.

The car painted at last:

Now it’s time to reassemble all of the mechanicals!

The paintwork all flatted and polished:

The major mechanical stuff such as new brake and fuel lines has been completed:

Under the bonnet Paul and Andy have done a fantastic job cleaning everything up and replacing bits where appropriate:

The rocker cover took three hours to polish up apparently. I certainly won’t be feeling any way embarrassed when I take the car to shows!

Finally a view of the front of the car, complete with cleaned-up headlamps:

I umm-ed and aah-ed for a while regarding the headlamp wipers and whether I should get them put back on or not. Part of me said ‘yes’ for originality but the more pragmatic side said ‘no’. The wiper motors were always going wrong as I remember from my previous Monza and here in the UK the weather isn’t really bad enough to need headlamp cleaning, especially in the south of England where I live. My 2002 Mondeo Ghia X doesn’t have any headlamp wash/wipe system and actually I think the Monza looks better without the wipers so they are staying off!

There are one or two jobs remaining to be done, such as installing Silent Coat sound deadening in the cabin, but at the moment the expected completion for the old girl is March – not long to go now!

Collection day – the end of the restoration story, from the bodywork side anyway. The car has been ready for a few weeks but because of the COVID-19 pandemic I haven’t been able to get her until now:

The car looks great. Paul and Andy have done a fantastic job in bringing this piece of Eighties history back from the brink and giving her a new lease of life.